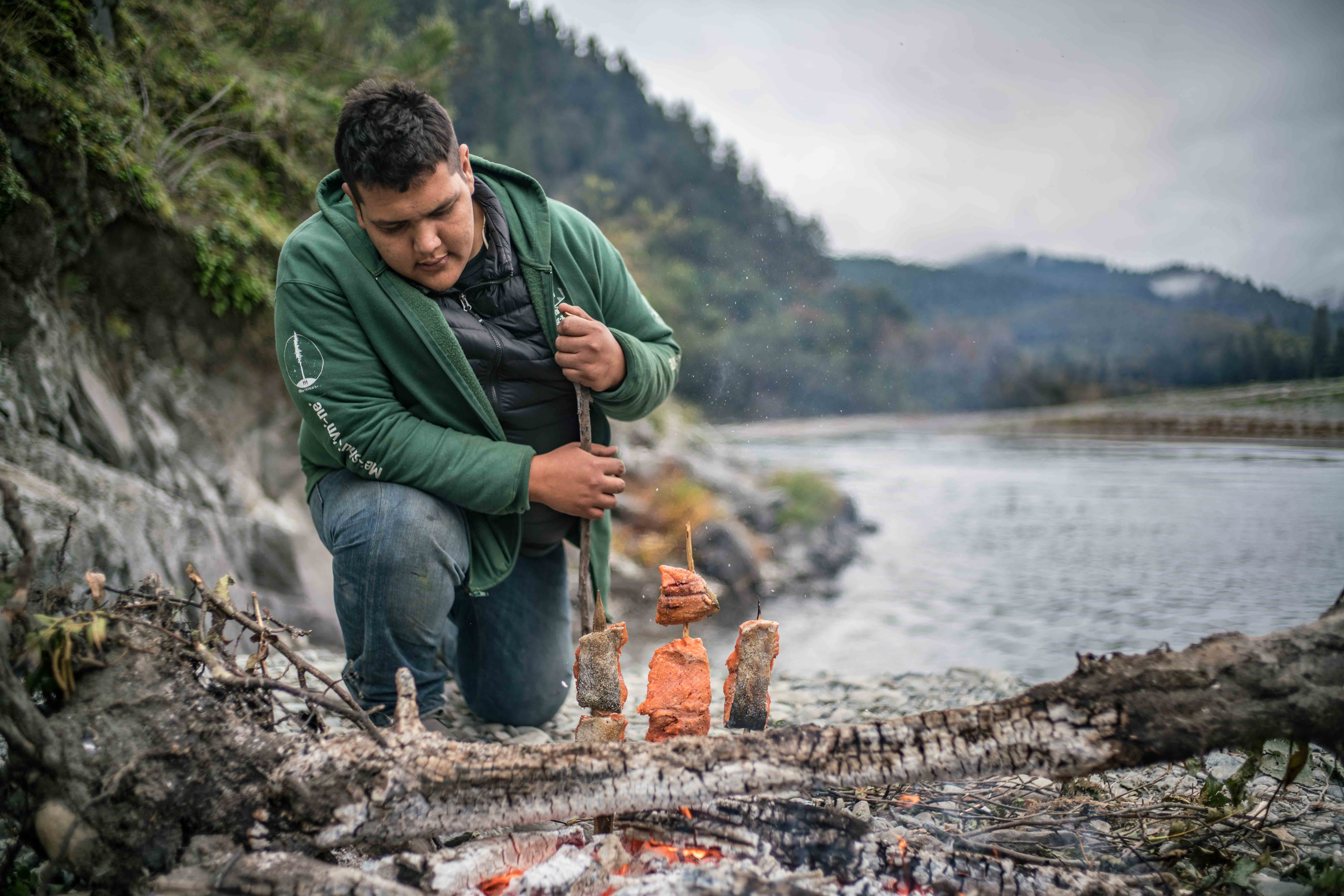 “Now we’re on the other side of the apocalypse.”

The well-known culinary artist was referring to efforts that Native American communities are actively pursuing in order to reclaim their traditional foods, diets and systems – as well as return to traditional nutrition and well-being – which is broadly called the “Native food movement.” This earnest rebuilding comes after hundreds of years of colonialism that sought to eliminate America’s original inhabitants through many means, including the decimation of their well-established food and agriculture systems, through the taking of their fertile crop, fishing and hunting lands, and by forcing their reliance on unhealthy foods that were foreign to their tastes and adverse to their health.

A new feature-length documentary film titled Gather focuses on this growing Native American food sovereignty movement. It premiered in the Spring of 2020 and is on the festival tour now. In a nutshell, the film outlines the destruction and appropriation of Native food systems, as well as chronicles the rise of the Indigenous food movement in North America.

First Nations Development Institute (First Nations) is involved in the production of the film. With Gather focusing on Native food sovereignty, it fits perfectly with First Nations’ longtime programming and grantmaking effort called the Native Agriculture and Food Systems Initiative, or NAFSI, which has been underway since 2002.

The film features many of First Nations’ NAFSI grantees and partners, as well as others who are making huge strides in advancing Native food sovereignty as a way of asserting tribal sovereignty, reclaiming control of Native food systems, and helping restore the health and well-being of Native communities.

The film project and its related journalism effort are being underwritten by NoVo Foundation and The 11th Hour Project of the Schmidt Family Foundation. Gather is being directed by Sanjay Rawal (Food Chains) and produced by Tanya Meillier and Sterlin Harjo (Seminole/Muscogee). Renan Ozturk is the director of photography. The film’s website can be found at http://gather.film/, and it can be found on Facebook at www.facebook.com/gatherfilmproject and on Instagram under @gatherfilm. Currently, Gather social followers are being asked to share planting photos as communities begin their growing seasons using the #sowindigenous hashtag.

“The film traces the intentional destruction of Indian food systems, but more importantly, Gather tells the story of the rebuilding of those food systems, which is a story about Indian resilience and the renaissance of their food systems,” said First Nations President & CEO Michael E. Roberts (Tlingit). “The overall goal for the film is to build national and international awareness, understanding and appreciation of the Native American food movement while also raising critically-needed additional funding for Native food projects, improving the policy and regulatory environment for these efforts, and solidifying this burgeoning movement for long-term sustainability, which, in turn, helps ensure the long-term improvement and sustainability of Native American communities themselves.”

“NoVo Foundation’s Indigenous Communities Initiative is pleased to support Gather as it portrays Indigenous food systems as the sophisticated, cosmopolitan and dynamic systems that they were prior to colonization,” said Hester Dillon (Cherokee Nation), Program Officer for Indigenous Communities at NoVo Foundation. “It’s important to be clear that realities for many Native people, such as obesity and diabetes in the United States, largely came about as a deliberate and ongoing effort to destroy Indigenous foods and food systems and to separate Indigenous peoples from the lands, plants and animals that provided our sustenance. It’s even more important that Native audiences see our resilience, creativity and resistance as Native people celebrated in this film.”

Current plans call for conducting 150 screenings of Gather in local Native communities during 2020 that will be supplemented with local discussion forums or panels on Native food sovereignty efforts. Plans also call for launching efforts to substantially increase the amount of philanthropic dollars that flow to these Native food-system projects, possibly under a new First Nations Gather grantmaking initiative that will further assist and enhance grassroots food sovereignty efforts in Native communities and provide training and technical assistance. This initiative may also include a new Native agricultural scholarship program to grow young Native farmers who will learn various agricultural, farming and business skills and return to their communities to help reclaim their food systems and possibly generate new businesses.

Gather is more than just a film. As noted above, it’s a wider storytelling project that also involves a related journalism effort that launched in 2018. Headed by Kim Baca (Navajo/Santa Clara Pueblo), with support by Taylor Rees, the project has generated numerous food sovereignty articles in publications such as the San Francisco Chronicle, Slow Food USA, Civil Eats, High Country News, Indian Country Today and others, with more to come. The project has also involved participatory photo workshops, such as one that was held on the White Mountain Apache Nation that taught hands-on camera skills and visual storytelling to Native youth.