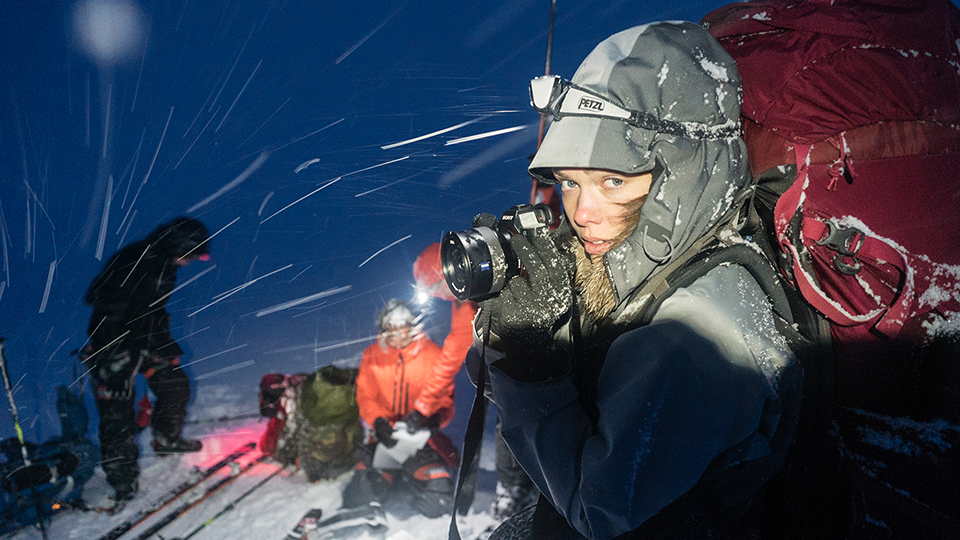 Women in the World

Women in the World

The first time I encountered Taylor Freesolo Rees, in Jackson Hole, Wyoming, in 2011, she was assistant to a local naturalist who worked with tourists, pointing out goldfish that somebody had “liberated” into the area’s geothermal hot springs.

The second time I encountered Taylor Freesolo Rees — her middle name infused with an almost ludicrous promise of nail-biting adventure, like “Indiana” — she was in the September 2015 issue of National Geographic, a member of “one of mountaineering’s most dangerous journeys.” This expedition to the remote 19,000-foot peak of Hkakabo Razi was a bust: “Northern Burma, as it turns out, is no place to try to bring 27 duffle bags,” Rees later wrote on a blog post for the Telluride Mountainfilm Festival. But her documentary of the aborted ascent, Down to Nothing, which she co-directed with Renan Ozturk, earned the festival’s 2015 cinematography award.

“Modernity, especially in America … it’s just so easy to fall asleep,” Rees recently told Women in the World from her home in Park City, Utah. “I think that’s why people turn to adventures: to wake themselves up.”

Rees, who is 30, was born in Idaho, where both of her parents worked for the Forest Service. After they divorced, Rees grew up “all over” — Iowa, Michigan, New Jersey, Massachusetts — and though she admired their careers as environmental engineers, she also embraced what she calls “the natural rebellious spirit.” This flowered at Pennsylvania State University, where, studying biology, Rees spent two summers with a  professor in Greenland, observing how climate change was impacting the flowering period of plants. “I just wanted to hang out at the bar with the Inuits,” Rees recalls. This wasn’t disinterest so much as interest in a different area: “What’s going on with these people? What’s their understanding of the changing environment?”

Rees had noted how the seasonal influx of scientists seemed to sideline the knowledge of native residents. So during her second summer, she brought a video camera. “That was the first time I was interested in documenting the perspective of groups whose voices were generally left out of the conversation. Not always, but often.”

After college, Rees made more amateur films at the Santa Fe Indian School in New Mexico, where she worked with the Navajo as a substitute teacher. But she missed rock-climbing, which was, after all, the genesis of her middle name. “I did what everybody does: I bought a $500 pickup truck and drove to Yosemite, Joshua Tree, Bishop. I just climbed for as long as I could on what money I had left.”

Eventually, following a stint in Jackson Hole with the naturalist and a citizen science outfit named TreeFight, Rees took her cumulative experience to the Yale School of Forestry and Environmental Studies. There, between ethnographic field trips to Alaska, she performed as Director of Programming for the Environmental Film Festival. Rees was also dating Renan Ozturk, the renowned artist, climber and filmmaker, who began helping her hone her storytelling skills as he documented events like Alex Honnold’s free-solo climb of El Sendero Luminoso, in Mexico. (Ozturk and Rees are now engaged.) “I knew I wanted to get into humanitarian and environmental stories,” Rees says, and working with Ozturk seemed to offer an immediate opportunity. Plus, she says, “I’ve always loved climbing and getting a little scared.”

The expedition to Myanmar for National Geographic and North Face began in October 2014. Theoretically, it was supposed to be about five athletes climbing and measuring Hkakabo Razi’s height using GPS, which had never been done before. Just reaching the mountain required a punishing 151-mile trek along an old salt trade route, though, and it only got worse from there. The experience pushed Rees to her limit. While the athletes ascended Hkakabo Razi, she stayed below to manage base camp. “I was there with what started as 20 Rawang people. They usually wouldn’t go up that high [as porters]. They were in flip-flops and shorts. Our translator disappeared, so it was just me and 20 people I couldn’t speak a word with for two weeks. And half of them left. One got pneumonia. One had pre-existing malaria. It was intense.”

Again, Rees found herself drawn to the secondary narratives — not the endurance climb itself, but the people behind it, the plight of the Rawang villagers who were struggling against a government that, having decided their area had tourism value, had begun restricting their traditional practices; and the true cost of sponsored trips that are expected to deliver flashy, press-friendly results. “It was such a raw look at the bigger picture of what happens in mountaineering expeditions.”

This “raw look” is the focus of one of Rees’ current projects, another collaboration with Ozturk. (Other projects in development include a documentary with the actor Jared Leto; a film-and-music performance with Jennifer Peedom and the Australian Chamber Orchestra; and tending to the growing popularity of her Instagram account). This past December, four young British men attempted an unassisted walk across Iceland that would expose them to hurricane-force winds and deadly fluctuations in temperature. The Coldest Crossing, as the expedition was titled, ended in three evacuations by Iceland’s Search and Rescue, followed by highly critical press coverage in the U.K. Rees and Ozturk tagged along to document the crossing, about which Rees says, “We certainly got what we asked for.” She describes their documentary, still being edited, as both “a coming-of-age story” and “a reflection on the state of adventure these days,” with its corporate sponsorship goals and media pressures.

“Somebody out there asked me recently, ‘Were you angry when you realized the team wasn’t going to be the first to cross Iceland? Because that’s the reason you came to film.’ And the answer is, not in the least bit. We didn’t go to tell that story; it was really about people.”

Like the expedition in Myanmar, Rees is quick to scratch up the ordeal as a learning experience, part of a series of attempts to reach some kind of enlightened understanding about what she and others are capable of achieving. “One thing that really came through to me on the trip is the idea that, for a certain type of person, being in survival mode can relieve anxiety,” Rees told Women in the World. “When you are trying to survive — boiling water, building a snow wall, checking the weather — you have no time for anxiety. And I think that’s so biologically and psychologically ingrained in us. We’re built with this incredible capacity to innovate solutions. I thrive when I’m confronted with a problem.”